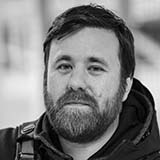 Rush Jopson is professional editor, camera operator and commercial director who has worked in the film and television industries in New Zealand and Australia for two decades. He has worked on comedy, drama, and documentary projects from Sydney to Tokyo - and recently produced a special for TV3 in New Zealand.

Rush brings with him a wealth of technical experience, from on-set to post-production. This combined knowledge, as both a DOP and an editor, means he knows how to get just the right shot to make you look great.

With a background in screen-writing, Rush also has a great instinct for story, character and motivation.